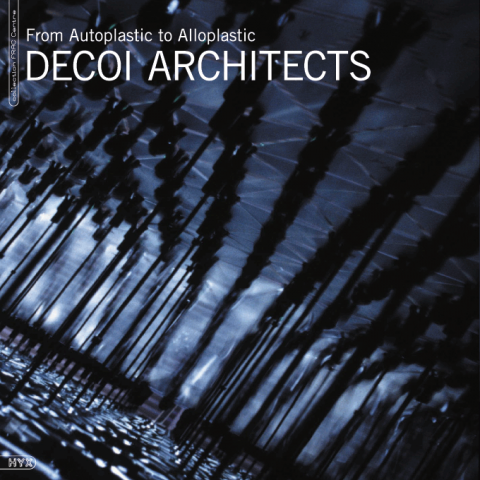 Decoi's approach is marked by an on-going quest for new generative possibilities in architecture, at the interstice of novel processes of conception and fabrication. For dECOi, technical transition initiates fundamental changes across thebroad sweep of cultural experience, within which architecture is then inscribed. Their recent research into "parametric" modelling, which consists of using the computer to create not a finished model, but rather a series of relations of elastic variables, has enabled exploration of a range of new generative dynamics. This imagines a fluid, evolving architectural process, informed by indeterminacy, an aleatory potential that is capable of adaptation in real time...

For Decoi, it is not just programme and form which are being rethought, but the very dimension of 'time' in architecture, understood as 'emergence' or 'formation'. As in the philosophy of Bergson, the object cannot be separated from its genetic process: architecture here does not produce an object, but a potential field of forces. Such digital production then profoundly questions the logics of representation. For dECOi this authorizes a return to 'decora(c)tive' form in its temporal dimension. Certain of these projects involve us in an architecture of exchange, not only of information with its environment, but sustaining dynamic environments in space and time. It is the body, then, which acts as decora(c)tion, immersed in a context that is now supple or flexible, inscribed in a dynamics of reciprocity that escapes all formal system. Here, digital technology offers new possibilities for 'non-standard' production in architecture, which extends from creative process to fabrication through the use of a variety of numeric command machines.

The issue of "presence" also permeates this whole decade of research, be it the disappearance of architecture as form in the projects of the early 1990s - the traces and vectors of a transitional state (Ether/I, 1995) - or the parametric transformations of Paramorph (1999), a spatial vortex generated through modelling site sound and movement. For dECOi, the challenge consists in creating not a form, but a potential form, not an architecture, but the possibility of an architecture, conceived within an open creative system in whose interstices an architecture is held between presence.